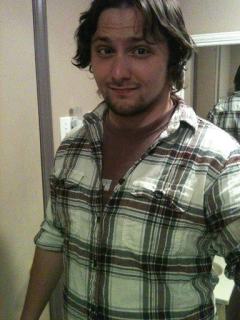 No, this is not a post about refuting atheism.  It is about a fundamentalist Protestant named Richard Bushey who invited me a few months ago to his Facebook group entitled, “Therefore God exists.”

He also has a blog with the same title.  The group is supposed to be about theological discussions; however, I found it to be extremely hostile to Catholicism and academically ignorant.  Nevertheless, I tried to give the Catholic Church’s view on particular ideas even if it rubbed these fundamentalists the wrong way.

Some of the people who posted are extremely uneducated and so stubborn as to persist with ideas that are contrary to history and Scripture.  I understand each denomination has its ideas on Scripture, but there comes a point where Scripture speaks for itself and there is no need to add to it.

It came to the point that Richard felt the need to attack me by calling me arrogant merely for countering his arguments that made no sense and distorted history.  He and others are under the false belief that Catholicism mysteriously appeared some time after the reformation and that no such Church existed in the 1st century.  Furthermore, the many attempts to deny the Catholic Church’s role in the formation of the Bible was just laughable.  These are obviously an uneducated bunch.  All historians are in agreement that the one and only original Church that can be traced to Christ is the Catholic Church.  Moreover, it is known in the academic world how the Bible came to be due to Pope Damasus I.  This is a fact that can be found in any history book and history course in any school around the world.

Here is an exchange that took place a while ago:  http://www.sacerdotus.com/2013/02/anti-catholic-dialog.html

The views that Bushey and others there share stems from the anti-Catholic rhetoric during the reformation.  When I tried to explain to them that their views are not reflective of history, they resorted to attacks against me and the Church.  I was eventually banned from the group. 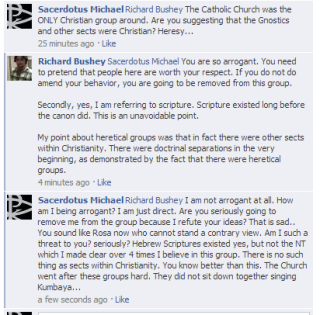 It is obvious that Bushey and his friends do not have the intellectual confidence to engage Catholic views and resort to tactics similar to that of Rubicondior who only wants to be heard and ignores other ideas.  I was a threat to them because Protestantism cannot be defended via Scripture.  The idea of Scripture alone stems from Luther, not Scripture itself.

Moreover, most of them do not accept Evolution.  This is absurd!  God is about truth and we all must accept the fact that Evolution is happening.  There is no disputing this biological fact.

It is sad to have these people misrepresent Christ and Scripture.  We must pray for Christian unity.

The Bible is not open to private interpretation.  When this happens, Christians go bad and new.

By Sacerdotus in Uncategorized on April 30, 2013.
← Sacerdotus vs Simeon Nkola “Atheism Dilemma – Should We Even Respond to Arguments This Bad?” – Critique →