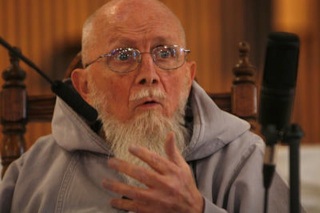 No not Fr. Benedict Groeschel, CFR…  That was my first thought when I read the news about the comments he made during an interview.  He apparently said that victims seduce predators and even called Sandusky a “poor guy.”

What was Groeschel thinking?  Victims don’t seduce anyone.  It is the criminal who has screws loose in his/her mind and attacks the victim.

I will write more as I get more info….

Since the whole incidence had occurred, both Fr. Groeschel and the Franciscan Friars of the Renewal have posted up apologies and denunciation of comments made.  Fr. Groeschel seems to be blaming his aging mind as the reason.  Others in the Catholic world are also claiming that he is suffering from dementia.  Be it as it may, the comments were totally offensive and out of line.

The whole social networking world was lit on fire insulting Fr. Groeschel, calling for the ban of his shows and books, even his death!   Others made connections to the Church claiming it to be some sort of child abusing mechanism with psychopathic predator priests.

This is unfortunately indeed.  This serves as an example that we must be careful what we say.   I do not understand why the NCR did not take another look at the interview before publishing it.  Sometimes we do think things and say them differently.

I pray for all victims of sex abuse and for Fr. Groeschel as he rides this wave of hate directed towards him.

Fr. Benedict Groeschel has stepped down from his EWTN Sunday show after consulting EWTN and his religious order, the Friars of the Renewal.  http://www.catholicnewsagency.com/news/father-groeschel-steps-down-from-ewtn-show/#.UEa9QFKwoTA.twitter

The Republicans are having their National Convention in Tampa, Florida this week.  However, due to hurricane Isaac approaching, the convention was cut down from 4 days to 3.

Many speakers spoke on the Republican view of America and why Americans should vote for Mitt Romney.  Mitt Romney’s wife, Ann Romney spoke about the love in their relationship.  The speech was needed because many accuse Romney of being out of touch.  Since he is a well to do candidate, Democrats accuse him of not knowing what the non-rich go through and therefore cannot help them.  Ann Romney painted the image of a candidate who worked for what he has and who is a good husband and father to their children.

Governor Chris Christie also spoke.  He gave a fiery speech about respect.  Some criticized his speech as being centered on his own bid for 2016 by mentioning the success he has had in New Jersey.  They were expecting him to use his blunt style to attack Obama and his failed policies.  Others spoke, such as Vice presidential pick Paul Ryan, Marco Rubio, Clint Eastwood, Condoleezza Rice, Zori Fonalledas, Rick Santorum and Mike Hucklebee.

Finally Mitt Romney gave his speech which presented him as an American who earned his current life.  He got emotional when speaking of his family and was fiery at certain points when recalling the state of America and what America should be.  He promised to work for the family, for the sanctity of life and the institution of marriage.  He promised not to raise taxes on the middle class and to show America’s “backbone” to Putin.  Romney also reiterated his support of Israel and the nation’s allies.

Romney’s speech was well done and I think gave a strong message to all, especially those who voted for Obama and are now upset at the outcome of Obama’s presidency.

Theists like Sacerdotus don’t really believe that they can argue god successfully with atheists. He understands full well that gods and leprechauns can’t be proven or disproven. His goal, as with all apologists, is to convince believers that their beliefs are not just foolish superstitions held without evidence. He makes no effort at convincing people who are capable of applying critical thought to the matter.
Look at Sacerdotus’ “debate” with Rosa Rubicondior for evidence of this:
http://rationallyfaithful.blog…
It’s not about serious debate, it’s about drawing traffic to a blog where he can claim victory with arguments that would get him an F in Philosophy 101. He knows that, but he hopes his readers don’t. He’s probably right.