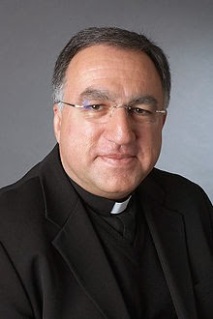 According to Michael Voris’ Church Militant TV and other bloggers, Father Thomas Rosica who is a spokesman for Pope Francis and the Vatican and also president of Salt & Light TV in Canada filed a lawsuit against a Catholic blogger David Anthony Domet who blogs at Voxcantor.blogspot.ca.

According to the lawsuit, Domet posted “…various entries… that are false, defamatory, or both.”  Fr. Rosica is even seeking damages for “damages to his reputation, work, and service to the church” as well as damages for Domet’s encouragement of Catholics to unsubscribed from Salt & Light Television.

I first became aware of this story from Catholic Pro-life blogger Suzanne who blogs at bigbluewave.ca.  The whole story is just mind boggling on many levels.  Why would a priest sue another Catholic?  I understand that priests are protected under civil law as well, but as priests they must be more charitable and do things the “Christian” way, not man’s.  Granted if a serious crime was committed, a priest should have equal protection under the law even against another priest or Catholic; however, if this is really all about something as silly as a blog post, then I do not see the reason to take it so seriously.

Nevertheless, I reserve judgment on the issue until I learn all the facts. From what I have read from the lawsuit papers, Rosica really does not have a strong case. Domet from Voxcantor was just giving his take on certain events in the Church that happened to entail Fr. Rosica. How can someone get sued for giving an opinion?

Moreover, if Fr. Rosica is doing this to save his reputation and save Salt & Light TV from bleeding subscribers, then I am afraid it will backfire. His actions have already disgusted several Catholics in the Catholic blogosphere. I can imagine how many in Canada have or are about to take Salt & Light out of their lineup.  These kinds of lawsuits often backfire in that manner.

Here are the lawsuit papers: http://www.churchmilitant.tv/documents/spec-2015-02-19.pdf

Fr. Rosica has agreed to drop the lawsuit against David Domet who blogs at Vox Cantoris.  He wrote in a statement that “it was never my intention to sue, but rather to issue a letter to “cease and desist” the frivolous calumny.”  He also claims that he is “not a high-ranking Vatican official nor a member of the hierarchy of the Church..”

“As the CEO of the Salt and Light Catholic Media Foundation and Television Network, I am not a high-ranking Vatican official nor a member of the hierarchy of the Church as erroneously claimed in several recent blogs.  In addition to my work at Salt and Light, I have had the privilege of serving since 2013 in a volunteer capacity as English language assistant to the Holy See Press Office.  I relate on a daily basis to hundreds of English language journalists around the world.  I know that this daily service has been encouraged and appreciated by the Vatican and by hundreds of journalists all over the world.
I fully support the teaching of the Church and welcome Pope Francis’ invitation to the whole Church to reflect seriously on the foundations of our faith. The recent Extraordinary Synod of Bishops has invited us to mature, honest dialogue and conversation and to find new ways and a new language to communicate the ancient story of the Church and our beautiful, unchanging doctrine to future generations.
Mature expressions of differences are welcome.  It is one thing to have differing opinions on church matters. However, there is fine line between difference of opinion and blatant destruction of person’s lives and reputations. Having been strongly advised to respond, as an individual and in no institutional capacity to the Vatican or to my place of work, to the continuous false, slanderous statements of a blogger over a long period of time that resulted in gross distortion, misinformation, many phone calls, letters and clear threats from callers based on the repeated false information contained in the blog, it was never my intention to sue, but rather to issue a letter to “cease and desist” the frivolous calumny. A legal firm, offering its service pro bono to us, issued a letter to cease and desist. No lawsuit was ever launched against the blogger! The matter is now closed.
Popes Benedict XVI and Francis have taught clearly that the Internet and blogs can be of tremendous service to the up-building of the Church and of humanity. They have never taught that blogs and social media should be used, in the name of fidelity, to engender slander, hatred, reviling and destroying.
In a world torn apart by hatred, terror and violence, often through the gross distortion of religion, we must be much more attentive to our use of social media and how it is used to unite rather than destroy humanity. Many in the Catholic blogosphere have contributed enormously to the spread of the faith, the defense of all that is good and beautiful about our faith and our Church, and the opening of dialogue among strangers. They are to be congratulated and encouraged. Others have chosen to turn the blogosphere into a black hole of vitriol, anger and profound sadness. As Catholics, the great privilege and freedom of expression and access to social media also have certain obligations of decency, integrity, honesty and charity that reveal who we really are as a faith community.
Fr. Thomas Rosica, CSB
CEO, Salt and Light Catholic Media Foundation” – http://saltandlighttv.org/blog/fr-thomas-rosica/a-message-from-fr-thomas-rosica-csb

I had stated that his “lawsuit/cease and desist” would not be successful because free speech is a right and would backfire on him because he is a priest and it just does not look right for a priest to sue a Catholic lay person.  There are better ways of handling situations like these especially within the Catholic Church.  Moreover, Catholic bloggers have a right to their own opinions and also a duty to voice their concerns to their pastors:

Canon Law 212
§3. According to the knowledge, competence, and prestige which they possess, they have the right and even at times the duty to manifest to the sacred pastors their opinion on matters which pertain to the good of the Church and to make their opinion known to the rest of the Christian faithful, without prejudice to the integrity of faith and morals, with reverence toward their pastors, and attentive to common advantage and the dignity of persons.

It is absurd for a Catholic priest or leader to sue or threaten to sue a Catholic writer for doing just that.  To my knowledge, no death threats were made.  No serious threats were made to warrant legal action.  While I understand Rosica’s concern for his reputation, I think he hurt it more with this theater.

Moreover, he blocked me on Twitter.  What the heck did I do to him? 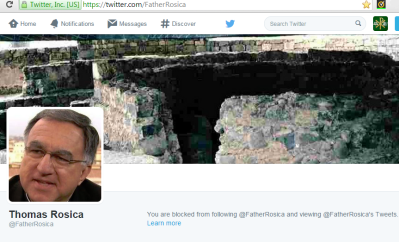 I really do not understand what is this man’s problem.  Not once did I attack him or side with anyone. I simply found it disturbing to learn of a priest suing another Catholic.  He apparently has some spiritual and psychological issues to work on based on my observation and opinion.  Perhaps he should reconsider his vocation.  Let us pray for him and all those involved.