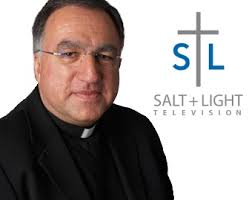 A new hashtag #RosicaBlockParty has become popular this past week on Twitter.  Apparently, Thomas Rosica who serves as one of the English spokesmen for the Vatican has gone bonkers on Twitter.  He has been blocking Catholics who have shown concern over the progressive talk in Synod 15.  If that is not bad enough, even a retweet of a tweet published by another criticizing him or news reports on the Synod, force him to block the person retweeting!

Rosica blocked me back in February of this year after I wrote a post on his attack against blogger Vox Cantoris see: http://www.sacerdotus.com/2015/02/fr-rosica-sues-blogger-vox-cantoris.html.  He had sent a cease and desist letter to the blogger just because the blogger gave his opinion on Rosica’s words and reporting of Synod 14 and other things related to the Canadian Catholic Church.  My post did not attack Rosica nor took any side, yet Rosica found me on Twitter and blocked me.  Prior to this, we have never exchanged tweets.  In fact, he was one of the first Catholic priests that I followed when I started my Twitter account in 2009. I had recognized him from World Youth Day 2002 and decided to follow him believing he was one of the “good guys.”  Well.. first impressions can be deceiving it seems.

This guy even went on my site to investigate what I wrote about him. I saw a Vatican IP address that had logged on my site.  Moreover, he apparently has been stalking other Catholic writers and has blocked them as well which is very creepy.  These Catholics were not even aware that they were blocked until they happen to visit his Twitter profile and saw the message.

Rosica is now still blocking fellow Catholics on Twitter.  These are Catholics who he dedicated his life to in order to sanctify, teach, and guide them as a Catholic priest.  He is even blocking seminarians and other brother priests!  What kind of message does that send to Catholics and non-Catholics?  Then he has the nerve to tweet about mercy and “meeting people where they are at.”  Well when he meets Catholics “where they are at,” he quickly builds a wall between them and himself it seems.

In response a Facebook page was made, see: https://www.facebook.com/Blocked-by-Father-Thomas-J-Rosica-CSB-Support-Page-1635512143377810/timeline/?notif_t=fbpage_fan_invite

As a former atheist, it is disheartening to see this immature man who was ordained a priest acting in this manner. Atheists love to pinpoint the faults of priests. They do not tire doing this. Rosica is giving them and other enemies of the Church ammunition and reasons as to why people should leave the Catholic religion and avoid it.  I understand Rosica may have felt offended by the criticism, but he has to be mature about it; evermore so as a priest and as a Christian.  Did not Jesus say, “If your brother or sister sins, go and point out their fault, just between the two of you. If they listen to you, you have won them over” (Matthew 18:15)?  Did not Jesus say that before we leave our gift before God on the altar to go and reconcile with our brother first (Matthew 5:23)?

Rosica has failed at this basic Christian principle yet has the nerve to preach about mercy and “meeting people where they are at.”  Moreover, he seems to have lied on his reasons behind the blocking.  He tweeted this below claiming that he blocks Catholics who use “filthy” language.  A simple Twitter search using his Twitter account @FatherRosica and any curse word spelling will produce no results showing Catholics using filthy language against him.

When ‘faithful Catholics’ use filthy, condemnatory language, you will be blocked! Visit other sites that use such tactics & go to confession

Good advice for those covering #Synod15 & dealing with those who write about us! “How to handle toxic people” http://t.co/uDUAxKsUqM

Good advice for those covering #Synod15 & dealing with those who write about us! “How to handle toxic people” http://t.co/Eu6zjEfVHx

//platform.twitter.com/widgets.js
In reality, he blocked Catholics just because they disagreed with him, do not share his progressive views, or simply retweeted someone else who does the aforementioned like myself who will be a future priest and simply just wrote on the Rosica & Vox Cantoris drama.  Rosica then judges these Catholics as being “toxic.” This is disgusting.  I just cannot believe this guy.  He seemed so genuine and alive in his faith during Saint Pope John Paul II’s trip to Toronto in 2002.  What happened?   When did neurosis replace the joy of Christ he is supposed to feel and express as a Catholic priest?

I advise Catholics to simply block him on Twitter (twitter.com/FatherRosica) and avoid giving him an audience.  Also block his serial bulk account twitter.com/@saltandlighttv as well.  Just click “block.”  Also write to the Vatican and share your concerns about the behavior of this spokesman.

I already sent my concerns.  The more people send their’s, especially clergy and those in leadership roles, the better.   Also, if you reside in Canada, you should request that Rogers remove Salt & Light TV network from their programming.  You can tell them that you will cancel your cable service if they do not since this network does not truly serve the Catholic faith and Catholics in Canada.

Let us pray for Thomas Rosica that Christ will remind him of his vocation.  He must learn to “turn the other cheek” and bear suffering for the Cross.

By Sacerdotus in Uncategorized on October 12, 2015.
← 28th Sunday in Ordinary Time – Not Easy to Enter Heaven Democratic Debate (CNN) →