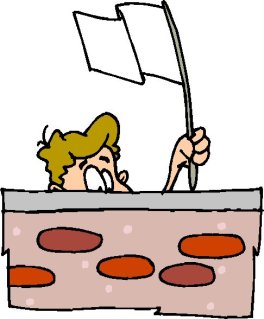 Since Summer 2011 a young black guy has interjected his “thoughts” – or lack of – to me on Twitter regarding God and religion.

Here is how it would go:

One Atheist would engage me, then another and then he would show up commenting on something he had no idea about since the discussion was not with him.

What is interesting is that this guy when questioned begins to retweet every response.  He does this so others can jump in to rescue him.

Within 20 seconds I have 10 Atheists engaging me, some joining the conversation civilly and others spewing vulgarities or comments projecting their apparent inner fascination with child molestation by mentioning the scandals of some priests.

I came to the conclusion that this guy named Xavier has no intellectual confidence and just trolls throughout Twitter looking to bait believers.

When he is confronted about his tweets, he gets upset and begins to use vulgarity to express himself.   By doing this he shows he has a poor vocabulary and cannot logically coherently express his ideas in a educated and civil manner.  In a sense, he starts out a college student and ends up a stereotypical ghetto thug within seconds.

Recently he invited me to comment on his blog but failed to give me the link.  He then begins to questions why I “avoid” his blog.  I had to contact another female Atheist he was involved with romantically just to get his blog link.

If that is not funny enough, when I do comment on his blog regarding Atheism as a Religion, he does not post it.  He then sends me a message attacking the post and making threats of blocking me on Twitter.  This guy is either bipolar or extremely silly.

Here are some of his silly tweets: 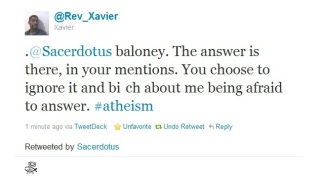 To my requests for him to answer my question “Can you prove there is no God” he continues on ranting attempting to claim that I am ignoring an answer he never gave.

Here I invite him to post his answer to my blog post http://sacerdotvs.blogspot.com/2011/11/atheists-please-prove-there-is-no-god.html  but he dilly dallies and begins to show his lack of intellectual confidence and cowardice.

Here he turns ghetto and begins using language that is not appropriate for an educated person.

Here he becomes jealous of my academic success and sends an ad hominem remark.
Now is this a rational person?  How can anyone take a so-called Atheist like this seriously?  He fails to provide reasons for his beliefs. Fails to have proper comportment during a debate.  Lacks the maturity needed to debate a serious topic.
His only answer is vulgarity and silly remarks that attempt to mask his lack of intellectual confidence and pusillanimity.
On his blog, he recently wrote a post attacking me and other Twitter people.  His paranoia is hilarious and sad at the same time.  He reminds me of a funny YouTube video with a reporter who starts out giving the news with a professional journalist inflection until a fly enters his mouth and he begins to talk like a ghetto person spewing profanity.
With so many intelligent Black people around like Maya Angelou, Barrack Obama, Oprah as role models.  I don’t understand why this guy feeds and perpetuates the image of the stereotypical ignorant and vulgar black man.   He gives ammunition for those who believe minorities are intellectually inferior to whites. I pray and hope he will come around after he matures.